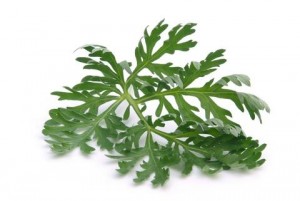 Wormwood is mainly used as a bitter tonic. Chances are that you have heard of the ancient proverb ‘bitter as wormwood.’ Its this bitter characteristic that gives wormwood its significant place in herbal pharmacopeia. As the name implies, wormwood is a powerful worming agent that has been historically used to expel parasites including tapeworms, threadworms, and roundworms from dogs, cats, and people. Wormwood can be taken in the form of capsule, tea, or extract.

Although the bitter principle in wormwood is largely nontoxic, just as it makes the life miserable for intestinal parasites, it can be harsh on the host. Contraindications should be carefully studied before using the herb and as always it is best to use it under the guidance of a health care practitioner.

Wormwood earned a bad reputation caused by confusion over the fact that an alcoholic drink called absinthe used to be made from parts of the wormwood plant. This drink was very strong and often abused thereby damaging the reputation of the entire herb. This drink is no longer produced.

HOW TO USE IT

Wormwood plant parts can be infused in oil or vinegars and used as insect repellents.

Wormwood is very bitter in taste and this bitterness is one of the key reasons for its success as an anthelmintic herb as it can literally drive out some of the worms and parasites. At the very least it makes it unpleasant for these critters to live inside you. It is best to use wormwood capsules (preferably thujone-free) instead of brewing your own tea because of the plant’s intoxicating characteristic.

It strengthens the endocrine system and thus helps in proper growth and maturity and helps in regulation of hormones. It also encourages alertness and activity by toning up the nervous system. It also strengthens immune system which provides protections against infections and diseases.

Small doses of wormwood tea taken before meals can stimulate digestion and prevent heartburn and gas.

Wormwood is also highly valued, especially for its tonic effect on the liver, gallbladder and digestive system. It increases stomach acid naturally, improving digestion and the absorption of nutrients. It also eases wind and bloating and, if taken regularly, can help the body return to full vitality after a prolonged illness. It can be taken as either capsules or tea; however it is recommended to take it as a tea since its bitter taste on the tongue is what actually causes the gallbladder to produce and release bile.

HOW TO MAKE WORMWOOD TEA

Wormwood tea is made from an infusion of fresh or dried leaves but it is best to use in dried form since it contains little if any thujone.

The best time to collect leaves and flowers of wormwood is on a warm, sunny day after blooming has begun in July. These parts are then dried in partial sun at 70 degrees F or more. Once dried, one ounce of dried leaves can be steeped for 10-12 minutes in one pint of boiling water.